These 31 samples comprise a collection of volcanic rocks associated with the hot-spot volcanism of the Hawaiian Islands. Samples were collected from various locations across the islands of Hawaii and Oahu. The collection contains samples of primarily tholeiitic & alkalic basalts, pumice, scoria, oceanite, and hawaiite.

Samples were collected from various locations on the islands of Hawaii and Oahu.

Hand Sample: Aphanitic light gray nephelinite containing some melilite. Melilite is the white minerals that range in size from 0.1 to 0.5cm. Sample contains numerous small sized (less than 0.05cm) vesicles that are evident on the cut face.

Hand Sample: Microcrystalline vesicular, dark-gray to black scoria. Vesicle size varies throughout the sample, ranging from larger circular vesicles with a diameter of approx. 1.5 cm on one surface and small vesicles (less than 0.1cm in diameter) on…

Hand Sample: Natural surface of sample is dark in color with smooth texture. Cut face reveals blocks of peridotite and dunite held together with a thin layer of lava cement. Sample has high specific gravity.

Hand Sample: Lapilli tuff containing pieces of pumice (HA-23) and trachyte obsidian (HA-22) ranging in size from 0.1cm to 1.5cm. Clasts are held together in light-colored ash. Sample surface crumbles when handled. Lapilli describes the size of the…

Hand Sample: Aphanitic light gray vesicular pumice. Sample has incredibly low specific gravity due to abundant vesicles. Vesicles range in size from less than 0.1cm to 0.3cm. Some vesicles on cut face appear to be filled in with a lighter material.…

Hand Sample: Aphanitic dark gray trachyte. Sample contains zones with abundant tiny vesicles (less than 0.1cm in diameter), however the majority of the sample does not contain any vesicles or phenocrysts.

Hand Sample: Aphanitic light gray vesicular basalt with large olivine crystals. Olivine phenocrysts range in size from single crystals approx. 0.1cm in diameter to clusters of olivine as large as 1cm in diameter. Vesicles throughout the sample are…

Ankaramites are dark porphyritic basalts that contain abundant pyroxene and olivine phenocrysts. Lesser amounts of biotite, and plagioclase may also be present.

Trachytes are an igneous volcanic rock with an aphanitic or porphyritic texture. Alkali feldspar, low amounts of plagioclase and quartz or a feldspathoid are common in trachytes.

Hand Sample: Aphanitic dark gray vesicular basalt. The vesicles are uniform and common throughout the sample, with diameters of approx. 0.05 cm.

Hand Sample: Aphanitic dark gray vesicular basalt with olivine crystals scattered throughout. The olivine crystals are most common in this sample than in other samples within the suite. Sample was collected from an olivine-rich zone within Mauna Loa… 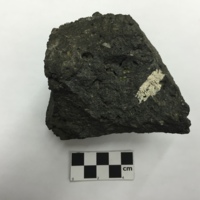 Hand Sample: Aphanitic medium gray vesicular basalt with scattered olivine crystals. Olivine crystals are commonly growing either in clusters or as one single crystal. Vesicles are found throughout sample and range in diameter from 0.05cm to 2cm.